Chef Roby at The Chew presenting Mini Me’s of Mario Batali and Michael Symon made entirely out of chocolate! Great time in the Big Apple!

In honor of Valentine’s Day, Chef Alain Roby of the All Chocolate Kitchen in Geneva has added a new chocolate sculpture to his repertoire. Made out of 948 pounds of white chocolate and sugar accents , “Eros” – the god of love – was sculpted for a Food Network special premiering Saturday, Feb. 7, at 7pm. ﻿ “Eros” will join the pastry chef’s other chocolate creations, including a 23-foot-tall chocolate tree made out of Dark Belgian Chocolate for Valentine’s Day in 2012; a 700-pound sculpture of Neil Armstrong in an astronaut suit, created out of white chocolate for the Adler Planetarium; a life-size, 650-pound, white chocolate Blackhawks player, which was presented to NHL player Eddie Olczyk at the Blackhawks’ celebration of the 2010 Stanley Cup, and “Randy” the Blues Player a 925lbs. scupture. 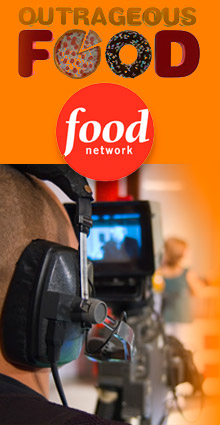